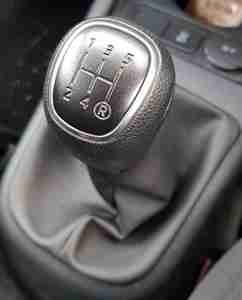 Why is changing gears necessary when driving? Simply put, as the speed of the car increases, the engine also runs faster. Changing into a higher gear brings down the speed of the engine while allowing you to maintain road speed. Having said that, you will sometimes need to change into a lower gear to provide extra acceleration; for instance when going up hills or overtaking.

Each gear works most efficiently within a certain speed range. As a rough guide the range for first gear may be from zero to a maximum of 15mph. For second gear it may be a minimum of 10mph up to 25mph; or whatever the figures may be for your particular vehicle. The maximum is not necessarily the absolute limit to the gear’s speed range, but generally the car should not be pushed past these points during normal driving conditions.

While the engine is turned off, put the clutch pedal down and go through all the positions of the gear lever. Make sure your palm is always relaxed and open when moving the lever; and that your hand is facing the correct way. Never rush or use force as this can only make things more difficult.

Once you are in second gear, I would recommend finding a safe place to stop. Then go through the procedure for moving off and change up to second gear again. Repeat this a few times until you are comfortable.

Next, aim to move off, change up to second gear, and then into third; for third gear you will need to increase your speed up to around 15 or 20mph. Check your mirrors before changing speed, to make sure no-one is about to pass you. With your palm facing towards yourself, change gear the same way you did for second gear.

If space and the road permits, work your way all the way up into fourth gear before stopping again. When you are happy with this part, you can practise changing down gears.

Before changing down, you need to reduce the speed of the car; always check your mirrors first. You can then ease off the gas and gently use the brake if necessary. Next, put the clutch down and move the gear lever into the position you want. Then smoothly bring the clutch fully up, and go back to the gas to maintain speed. When you are ready, move away working up to third gear, change down to second and stop. Repeat the process until you are happy.

As an extra challenge, pull away and change up to third again, change down to second, and also into first gear before coming to a halt. You need to be at a very low speed before changing into first gear while on the move; but this is good preparation for when you start approaching junctions later on.
During normal driving, it is not always necessary to change gears one at a time. It is quite acceptable, and often preferable to miss out gears by going from fourth say, straight down to second (block changing). There is no point in making three gear changes on approach to a junction for instance when one will do. For the time being though, you should continue to use all the gears to get used to basic gear changing.

Why do we Keep Stopping?

Continuous stopping during this practise session gives you the chance to relax for a moment or two, and gives you the opportunity to correct any mistakes. Once you have grasped the idea of using gears and there are no obvious problems however, such frequent halts may be unnecessary. You can keep on the move for longer periods and practise changing up and down through the gears without such frequent stops.

Under ideal conditions, changing gears should be learned fully before progressing to other areas, but this is not always possible. In many cases, left turns need to be covered as well in order to provide the necessary road space.